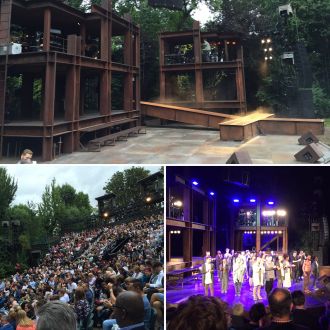 Recently I was lucky enough to be invited to the Regents Park Open Air Theatre to see the current production of Tim Rice and Andrew Lloyd Webber’s seminal musical, Jesus Christ Superstar.

It was the first time I’d visited the venue, and wow, what an incredible space. The amphitheatre is nestled in the trees and immediately upon walking in, you are captivated by the feeling of intimacy despite the fact that the auditorium holds 1,250 seats, making it one of the largest in London.

The set was incredibly simple at first appearance; made to look like 2 steel structures that may have been there for hundreds of years, and the theatre built around them. Throughout the show, however, there are a number of hidden secrets; pyrotechnics that emerge from the front of the stage to create a ring of flames, a giant crucifix that glows and smokes at pinnacle moments, and unusual staging spaces that hold the live band and ensemble cast. The technical design of the space is extremely impressive, especially given the fact it is completely open air and all of the equipment has to be able to withstand all extremes of the British summer weather!

The cast were phenomenal, with some of the best voices I have heard in recent West End Theatre, and there were standing ovations from the audience throughout. The show culminated in rapturous applause and cheering at the finale moment. The thing that impressed me most was the ability of the designers, production team and cast to use such a simple space and environment to truly captivate the audience, draw them in, hold their attention and stir their emotions in such an effective way.

On my walk home, I overheard a couple discussing how bizarre it was that they had listened to the soundtrack at home beforehand and not liked it, almost to the point that they nearly didn’t come. In the live environment, however, they were blown away by the show and wanted to come back and see it a second time!

This is the power of live. The power of being one-on-one with our audiences. When we’re in the room together, we’re able to have far more intimate conversations. We don’t always need to build elaborate environments to communicate powerful messages, but it has to be done in the right way.

It's no different, really, for business communications. Even with all of the wonders of remote conferencing technology, there really is no replacement for experiencing your message and your brand live, in the room with you.

Maybe the gold sparkly suit is only appropriate for musical theatre, though.